“My office is committed to transparency and data-driven policies and these new dashboards promote increased public access to criminal justice data,” said District Attorney Boudin. “I commend the hard work of our data team in creating these new, straightforward dashboards to increase transparency and information access and we are proud to share them with the public.”

The newly created “SFDA Prosecutions of SFPD Incidents & Arrests” dashboard tracks the number and types of incidents reported to the San Francisco Police Department (“SFPD”) that result in arrest as well as those that result in criminal prosecution. Users can filter searches by police district, year, and SFPD Incident Category to follow reported incidents as they proceed through each phase of the criminal legal process.

For example, say a member of the public is interested in knowing how many reports of auto burglaries police in the Central District received in 2021, and what percentage of those arrests that were presented to the San Francisco District Attorney’s Office (“SFDA”) resulted in prosecution.  As shown below, using the dashboard, a public user can select the appropriate filters to learn that Central District police received reports of 4,719 auto burglaries in 2021.  The dashboard will also show that of those incidents, 0.74% resulted in an arrest, and of those arrests presented to the San Francisco District Attorney’s Office, 74.29% resulted in criminal prosecution.

Note that, as indicated by the name of this dashboard, this dashboard only reflects reports and arrests made by SFPD, not other law enforcement agencies such as California Highway Patrol or the San Francisco Sheriff’s Department.

The recently updated “SFDA Actions on Arrests Presented” dashboard allows members of the public to view how many cases of each crime type law enforcement agencies have presented to the SFDA, and what actions the SFDA has taken on each of them.

The new update to this dashboard allows users to see crime trends for more than 60 different types of crimes. The crime types are based on the California penal code and each is categorized by the most serious criminal allegation. The dashboard also provides more detail as to the SFDA “Action Taken” category for cases by specifying what specific actions were taken by the District Attorney’s Office—such as, for example, whether the Office filed charges, moved to revoke probation or parole supervision, or referred the case to law enforcement for further investigation. (Requests for further investigation may include asking for fingerprint or DNA evidence or requesting that police retrieve video surveillance footage.). These updates allow for increased transparency, more detailed information, and increased understanding of SFDA responses to cases presented.

For example, say a member of the public is interested in learning how many robbery cases law enforcement presented to the SFDA in 2021 and how the SFDA responded to those cases.  By selecting the appropriate filters, a public user of this dashboard could learn that in 2021 law enforcement presented the SFDA with 280 cases in which robbery was the most serious charge.  Of those, the SFDA filed new charges in 71.79% and took action on 84.64 of them%. 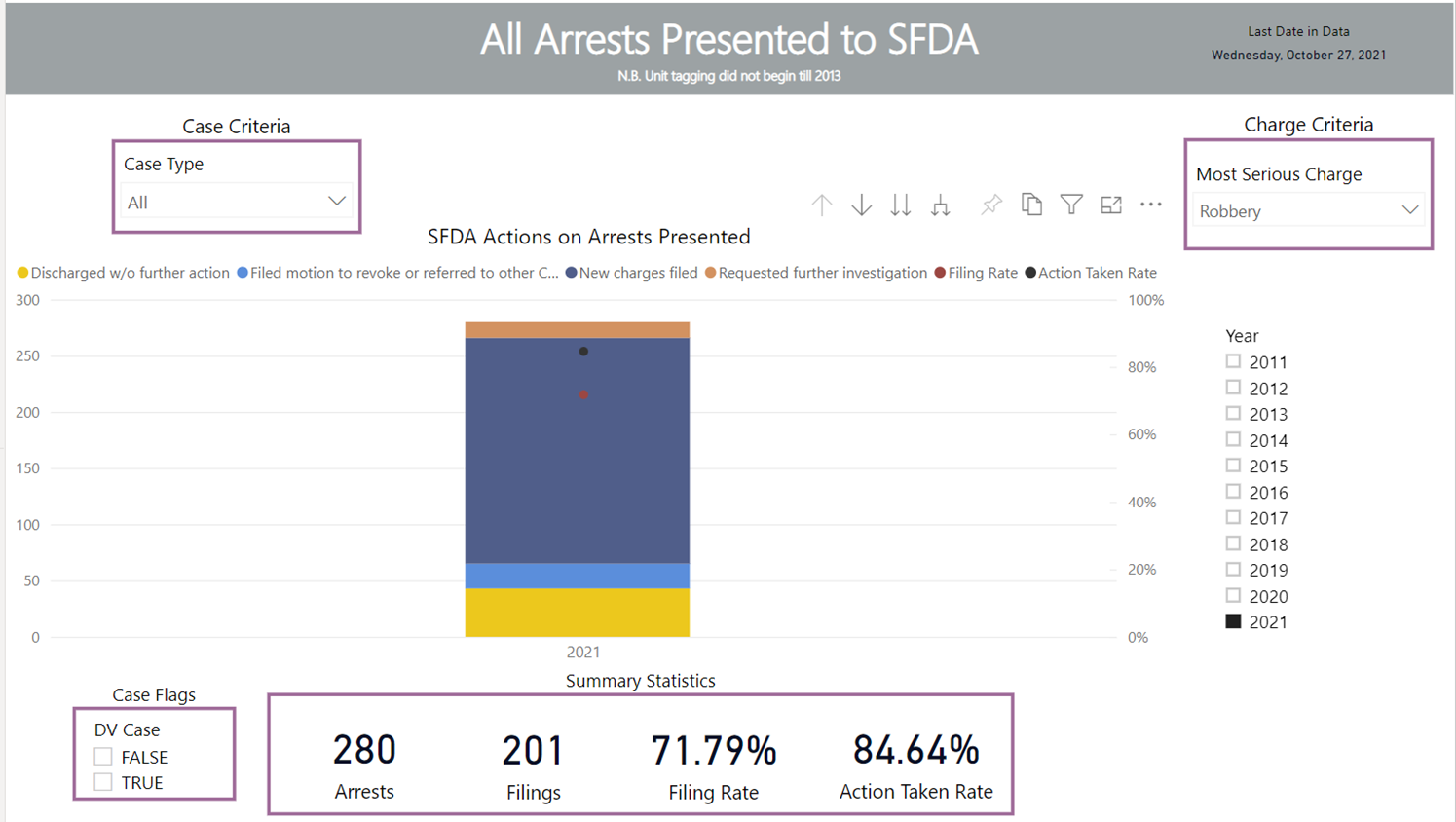 District Attorneys are ethically prohibited from prosecuting cases that lack sufficient proof.  Although police officers can make arrests based on probable cause to believe a crime has been committed, the standard for prosecuting and filing charges requires a higher standard—proof beyond a reasonable doubt.  Because of these different standards, there are cases in which the evidence presented upon arrest is insufficient to bring charges.  A primary function of the SFDA’s Intake Unit is therefore to review all new arrests presented and make charging decisions—including what charges to file and whether a case must be discharged. The “SFDA Actions on Arrests Presented” dashboard allows users to see the filing rates for each charge, and how those rates have changed over time.

Incident numbers on the “SFDA Prosecutions of SFPD Incidents & Arrests” dashboard are taken from SFPD data made available to the public by www.dataSF.org, a city-wide public data portal.  SFPD data are matched with SFDA data derived from the District Attorney’s Office’s case management system, known as DAMION.

In the data set maintained by the SFPD, certain sensitive incidents are excluded to protect victims, such as in cases of homicide and domestic violence. Also excluded from this dashboard are incidents with incomplete data or non-criminal incidents, such as lost property.

Because of the key differences between these two data systems, the most accurate source of data on prosecution rates is the “SFDA Actions on Arrests Presented” dashboard, as it draws exclusively from SFDA data and includes arrests presented from all arresting agencies in San Francisco.

The San Francisco District Attorney’s Office has demonstrated a longstanding commitment to data transparency and has maintained publicly available dashboards for many years. In 2019, the San Francisco District Attorney’s Office became the first California District Attorney’s Office to aggregate its prosecutorial data, including prosecution and conviction rates on online dashboards. In 2020, the SFDA made publicly available the “Justice Dashboard,” which provides information about adults who were convicted of a crime and sentenced to county jail or community supervision. The Justice Dashboard breaks down that data by race/ethnicity, gender, age, and offense type.  The new dashboards announced today build off of the SFDA’s longstanding commitment to advancing transparency and creating accessible tools to the public.

Praise for the New and Updated Dashboards

The Yolo County District Attorney’s Office, which itself has worked to promote transparency, echoed these remarks.  “The San Francisco DA’s updated data dashboard is a leap forward in the transparency race that every district attorney in the nation should be running in to improve the criminal justice system,” said Yolo County District Attorney Jeff Reisig.

“Our primary goal in this project was to present complicated criminal justice data in a way that is both accurate and accessible,” said Mikaela Rabinowitz, Director of Data, Research, and Analytics at the San Francisco District Attorney’s Office, who oversaw the creation of the new dashboards. “Our dedicated team spent several months reviewing, cleaning, and linking different data sets to ensure accuracy and consistency.”

Members of the public can access the new dashboards here.