Under the leadership of District Attorney Chesa Boudin, the San Francisco District Attorney’s Office works tirelessly to restore victims, resolve harm, and break the cycle of crime. As gatekeepers of the criminal justice system, prosecutors have both a legal and ethical duty to ensure the system operates effectively and without bias to protect public safety.

DA Stat is built on a commitment to data collection within the San Francisco District Attorney’s Office, collaboration across local criminal justice agencies, and statistical analysis.  Together, these generate meaningful and actionable operational metrics. Since implementing DA Stat to improve and institutionalize office analytics, the SFDA has been heralded as one of the most renowned data-driven prosecutors’ offices in the United States (Urban Institute Survey, 2018).

San Francisco is the first District Attorney’s Office in the state of California to share prosecutorial data and metrics with the public. As stewards of the public trust and guardians of the constitution and the criminal justice system, SFDA is committed to public accountability and transparency.

SFDA has published four public dashboards visualizing  SFDA Prosecutions of SFPD Incidents and Arrests, SFDA Actions on ALL Arrests presented, Incoming Cases, Trials, which we are updating on ongoing basis.

Although these dashboards are intended to provide similar statistics for various stages in the criminal justice process, there are important differences in how data are tracked by SFPD and SFDA which result in different numbers for the same data points on each dashboard.

First, although approximately 80% of arrests presented to the SFDA come from SFPD, there are also arrests presented to this office by other law enforcement agencies, such as California Highway Patrol or the San Francisco Sheriff’s Office. These incidents are not included in the SFDA Prosecutions of SFPD Incidents & Arrests Dashboard, so it cannot account for the rate at which SFDA prosecutes these cases. Thus, although this dashboard provides important context about where the DA’s Office fits into the larger process of responding to criminal conduct, the Arrests Presented and Prosecutions Dashboard is the accurate source of prosecution rates.

Second, there is no established standard for categorizing crime types, resulting in differences in how the same incident is categorized in different dashboards. For example, if an incident involves a theft allegation and a weapons possession, it is possible that one agency will categorize it as a theft and the other as a weapon possession. Because the SFDA Prosecutions of SFPD Incidents and Arrests dashboard uses SFPD data as its starting point, the incident categories are based on SFPD categorization. The SFDA Actions on Arrests Presented Dashboard uses crime categories from SFDA data, which come directly from the California Statutory Code.

SFDA takes steps to ensure the accuracy of this data; data practices and quality are regularly audited. As it becomes available, additional data points and information will be added to this portal. 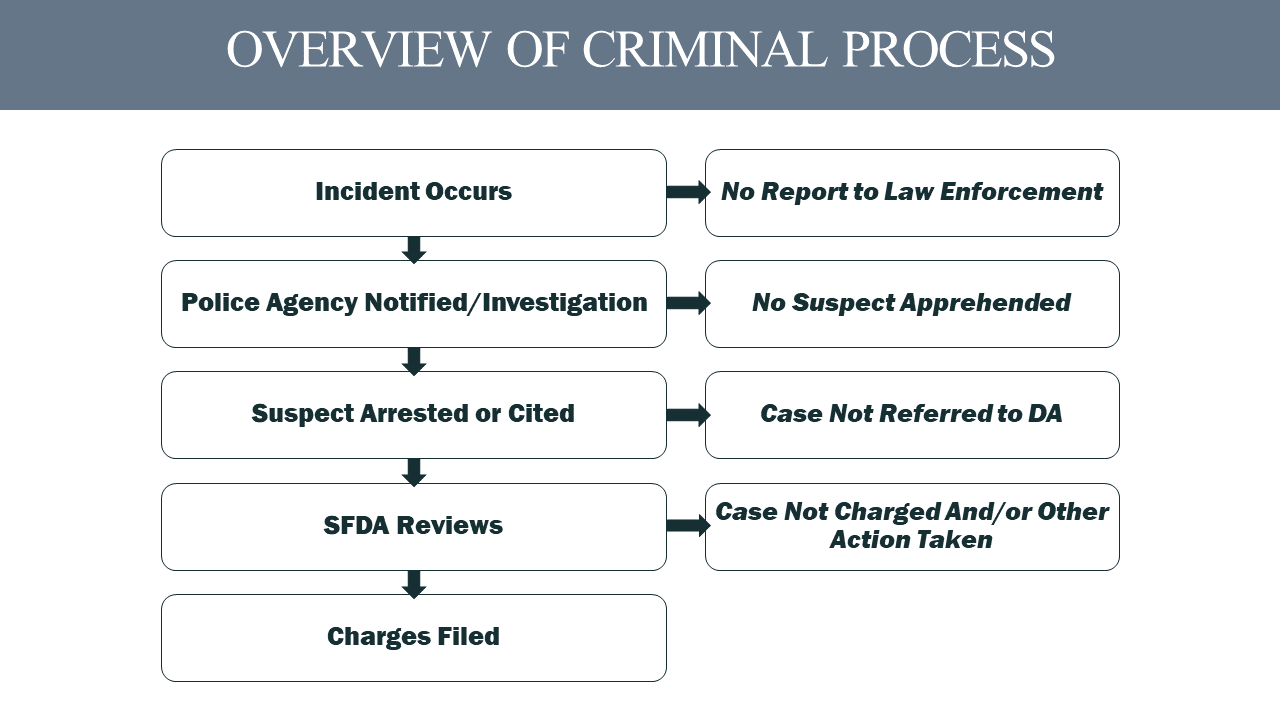 SFPD data from datasf.org from 2011 to 2017. This data used to be stored in an old database that no longer exists. This data is cleaned to properly label incident category types and label police districts according to current police district outlines, and to remove non-criminal incidents.

SFPD data from datasf.org from 2018 to present. This data set includes reports that have been filed as of January 1, 2018. The reports are filed by officers or self-reported by members of the public using SFPD’s online reporting system. The data is then stored and compiled in SFPD’s new system called Crime Data Warehouse (CDW). This data is also cleaned to remove non-criminal incidents. Data from this period is labeled differently than previous SFPD open data and many more incidents, including domestic violence, certain juvenile incident codes and assault incidents, are removed.

SFDA DAMION rebooking data from 2011 to present. DAMION is SFDA’s case management filing system. This data is cleaned according to standard processes to capture only arrests presented to SFDA’s office for filing.

After law enforcement has made an arrest for suspected criminal activity, the arresting agency presents its evidence to the District Attorney’s Office to determine what, if any, charges can be proven beyond a reasonable doubt. In San Francisco, this prosecutorial decision to file or to reject arrest charges is called, “Rebooking,” and it represents the first, and one of the most important, decisions of the District Attorney’s Office. In addition to either filing new charges or declining to file charges (“discharging” the arrest), the prosecutor may also take other actions, such as initiating a motion to revoke probation or parole. By including new filings as well as other prosecutorial actions, and dividing them by the total number of arrests presented, we measure the total “Action Taken” rate of the office. The Dashboard Legend below explains the information presented in the dashboard in further detail:

Arrest Date: The date the suspect was booked into county jail for the arresting incident

Court No. Presented: Count of court numbers (arrests) presented by law enforcement for review by the SFDA.

Total Actions Taken Ct.: Combined count of court numbers filed or prosecuted by other action by the SFDA.

Action Taken Rate: Combined percentage of court numbers presented to the District Attorney’s Office of those either filed or prosecuted by other action by the SFDA.

Year: The year that the arrest occurred. By clicking the triangle to the left of the year, you may also filter by quarter, month, or day within a given year.

The charging process reflects the work product and collaborative efforts of both the arresting agency, and, the prosecutor, who must use discretion thoughtfully to file charges in a fair and equitable manner that advances public safety. Although the vast majority of arrests presented to SFDA are generated by the San Francisco Police Department (SFPD), there are several police agencies operating in San Francisco who also make arrests, including the University of California Police, and BART Police.

The District Attorney’s Office reviews the following types of arrests:

Please note that the crime types listed are not aggregated into broader categories. In addition, certain types of victimization like domestic violence are split across multiple crime types.

Once the District Attorney’s Office takes action to prosecute a case, whether by filing new charges or filing a motion to revoke probation, the case will be assigned to the appropriate unit and to a prosecutor within that unit. The incoming caseload is determined by both the volume of arrests presented by law enforcement, and the rate at which the SFDA prosecutes those cases. Cases remain on a prosecutor’s caseload until they are resolved, whether through a negotiated disposition, dismissal, or trial. At the point of filing a complaint, SFDA prosecutors categorize each case by the crime type, reflecting the most serious charge on the case.

To better reflect the work of the Office,  some crime type categorizations have changed and been added over time. For example, in 2014, SFDA transformed the Child Abuse category into two distinct categories: Child Physical Abuse and Child Sexual Abuse. Similarly, in 2014, the office began categorizing the various crimes under the Domestic Violence umbrella by their specific type, which for the most part include, Assault, Threats, and Stalking. More information can be found in the DA Stat Dashboard Codebook.

Arrest Date: Both felony and misdemeanor filings are organized by the arrest date.

Filing Date: Motions to revoke probation or mandatory supervision (categorized under “MTR”) are categorized by the filing date

Court Number: The unique combination of a defendant and criminal incident, which may include one or more criminal charges.

Misdemeanor: Count of all misdemeanor court numbers filed with new charges by arrest date. Note that this count includes filings based on both custodial and cited misdemeanors.

MTR: Count of all motions to revoke probation and mandatory supervision by filing date. The data are only available from 2014 onwards.

Year: The year that the arrest or MTR filing occurred. By clicking the triangle to the left of the year, you may also filter by quarter, month, or day within a given year.

Crime Type: The crime type assigned at the point of filing, reflecting the most serious charge on the case. To better reflect the work, crime type categorizations have changed and been added over time.

Note: Due to changes in data collection protocols, our trials dataset is incomplete. We are actively working on improving it.

Please note that the crime types listed are not aggregated into broader categories. In addition, certain types of victimization like domestic violence are split across multiple crime types.

Jury trials are resource-intensive, and often the most public part of the criminal process. The vast majority of cases do not go to trial and resolve after plea negotiations between the prosecutor and the defense attorney. If the case cannot be resolved through plea negotiations, it may go to trial before a judge or a jury.  A jury is made up of 12 people from the community, and often a few alternate jurors.  Most trials are jury trials, and both the prosecution and the defense will have an opportunity to excuse some jurors before a final jury is sworn.  The selected jury will hear the evidence and will be tasked with determining whether the charges have been proven beyond a reasonable doubt.

Jury Sworn Date: The date that the 12 jurors are sworn in to hear the trial.

Defendant Trial: Defendant for each given trial. Co-defendant trials are counted separately, as each defendant may obtain a different outcome.

Convicted
: Defendant was determined to be guilty by the jury, or in rare instances, pleaded guilty during the course of the trial. Convicted trials are considered “tried to resolution” and are counted in the trial conviction rate.

Mistrial: The jury could not come to a verdict or a mistrial was called for some other reason. Mistrials are pending matters that may be prosecuted or tried again, and are thus excluded from the trial conviction rate.

Not Convicted: Defendant was determined to be not guilty by the jury, or the case was dismissed during trial. Not convicted trials are considered “tried to resolution” and are counted in the trial conviction rate.

% Convicted: The conviction rate is the percentage of trials ending in conviction out of all cases that were tried to resolution. A conviction is a trial where the defendant pleads or the jury returns a guilty verdict on at least one of the charges at trial (unless the only convicted charge is an infraction, in which case, the trial would be categorized as not convicted).

Year: The year that the jury was sworn. By clicking the triangle to the left of the year, you may also filter by quarter, month, or day within a given year.

Crime Type: The crime type assigned at the point of filing, reflecting the most serious charge on the case. Note that crime type categorizations have changed and been added over time.